The book is so far only in Danish.

It regards the untold story of how a national leadership prepares for nuclear war.

The book contains a lot of anecdotes and more than 250 illustrations.

Summary of the book

It could not be hidden from the neighbours that something big – something very big – was being built. The huge construction site was revealed to the few who spend time in the area – this was more than just the construction of a conventional building. A lot of soil and lime was being taken out and massive amounts of building materials were taken in.  The work went on for several years but no structure ever appeared. Neighbours suspected the construction must be inside the hill, but they never shared their knowledge with outsiders. It became clear to them that something big had happened to the local area – that they were in possession of knowledge that had to be kept secret.

Tucked behind an anonymous-looking house with a garden, garage and a flagpole is the entrance to one of the largest and most expensive buildings in Denmark. Behind a well hidden and guarded door, a 300 meter long corridor leads one into an underground facility of 5,500 square meters, built to withstand nuclear weapons and to keep itself totally independent from the outside world. This bunker is a construction that does not find its equal in Denmark and it probably never will be surpassed. With rations for weeks, own water and electricity supply, medical clinic, radio studio and conference facilities, it would be possible for the country’s most important institutions to continue working from here, in case the ministries in the capital were deemed too dangerous – or were destroyed during a war.

Four decades after its construction, the facility looks almost exactly like when it was built. Through all of these years, the facility has been on standby to accommodate the country’s key figures: the royal family, the Government, and the other top officials who are needed to lead the country during times of war, when the country may have been largely destroyed.

In great secrecy and through countless exercises, the ministries of state, foreign affairs, defence, justice, interior, and health, as well as many other players, have been trained to lead the country from the facility, should it be necessary.

The facility has hosted many exercises that simulate the worst case scenario of all – the total or partial destruction of society’s major institutions. Through the decades, the facility has been permanently manned in order to accept the Danish central administration during a mobilization. The story of the facility in this book is also a journey back in time to the Cold War when the threat of a new world war was constantly present.

The authors’ personal foreword from the book:

In 1994 we had a random conversation with a man who told us that there was something highly secret in the northern part of Denmark, but he wouldn't tell us what. One would expect this brief remark to be soon forgotten. However, this was not the case. For 15 years we sought information about the secret. We were sensing that it was a military facility, and the fact that it was surrounded by so much secrecy only made things more interesting. We gathered some information, but it was a slow process with many twists and turns. Denmark’s deepest secret turned out to be disguised as an idyllic private villa. We had been close to it numerous times, without knowing the truth.

We requested access to inspect the facility and to obtain information in order to write this book. After further dialogue and negotiations, our wish was, surprisingly, met. For the very first time, we stood in front of the entrance accompanied by the commander of the facility - this time on the ”right” side of the fence! To get acquainted with this uncompromising and exceptionally well made nuclear bunker and communications centre was one of our life’s greatest experiences. We hope you will share our enthusiasm.

Quotes from the colophon:

”In the Danish Defence we had no doubt that we were involved in a non-declared war and our enemy was the Warsaw Pact”.

”Why was such an exceptionally efficient but also, at the time, very, very expensive facility, built? It certainly wasn’t done out of fun. It was done because it was a necessity.”

”One of the most fatal decisions I helped make during the Cold War exercises in the facility, was when NATO asked Denmark permission to detonate a nuclear bomb over the Baltic Sea to demonstrate the seriousness of the situation.”

Denmark during the Cold War

The purpose of a relocation facility

The upper floor equal numbers. Government and Ministry of Defence

The upper floor odd numbers. Ministers and the royal family

The basement odd numbers. Ministers and other authorities

The basement equal numbers. Ministry of foreign affairs and Communications

The upper floor odd numbers. Cafeteria and the bunker of the office commander

Transportation to the facility

7: REGAN VEST in use

The Cold War from the sixties to the seventies

The construction of REGAN EAST 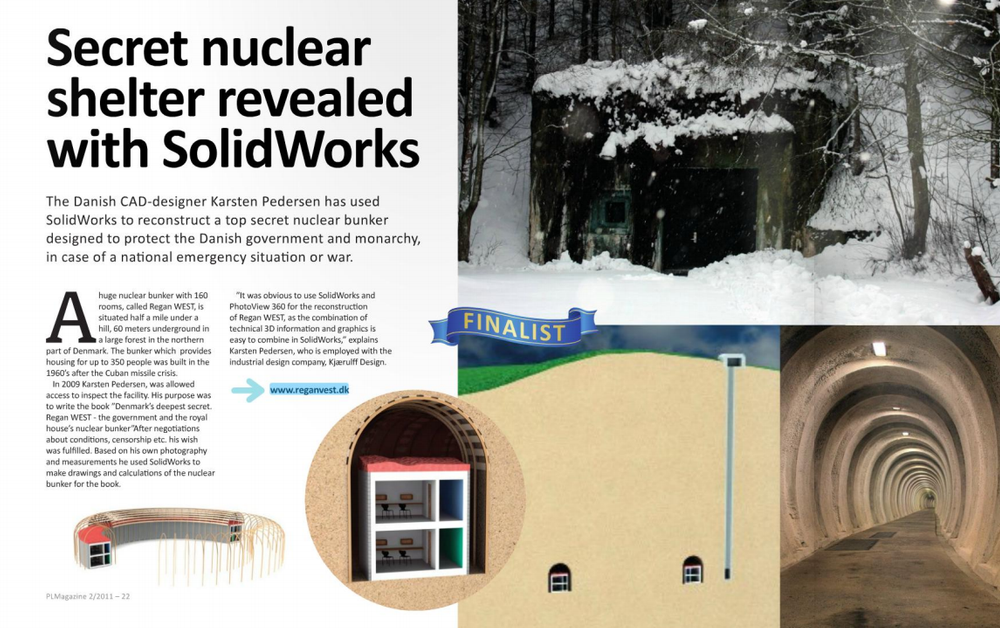